Last saturday I went out to film some timelapse photography. I was about to test the Canon 60D with Magic Lantern v2.3. First to test was the bulb ramping option to get smooth transition from day to night. Sun was shining and it promised a good sunset to film.

I took Canon 60D with Magic Lantern 2.3 installed and went to Ounasvaara. It´s a small hill next to Rovaniemi and there´s a view tower where you can see the city and the sunset (in winter). I was walking down the path when I met a group of young people who were finding a place to make a fire. I said that there´s a bonfireplace at the view tower where I´m going so we can join as a group. It seemed out that it was a group of exchange mediastudents from all over Europe. I said that if they want to join me later on the night for timelapse trip little bit more north they are wellcome. 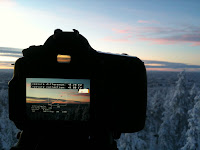 I climbed up the tower and set the camera to film the scenery with bulb ramping. Sunset mode and +0,5EV maximum change in exposure. Bulb ramping is a method how to film timelapse shots where you have so big dynamic change in the light that camera sensor can´t handle with static exposure values. For examle if you are filming sunset and starting when the sun is still shining your images will be darker every second the sun is setting down. In one point the sensor can´t handle it anymore and the images are only black. In bulb ramping you take couple shots from that scene and tell the camera that I want the exposure to be like this. The camera analyses the scene and when the timelapse it´s on it will change the shutterspeed to maintain the correct exposure for the ambient light. It can go for example from 1/200 sec to 20 seconds. This method works much better than auto exposure, which will result a flickering timelapse video. In Magin Lantern there is a setup for sunset and sunrise modes. In those modes the exposure can go only up or down and the shift between night and day should be smooth. Anyway there´s alwayes some littele fixing that you have to do in postproduction. 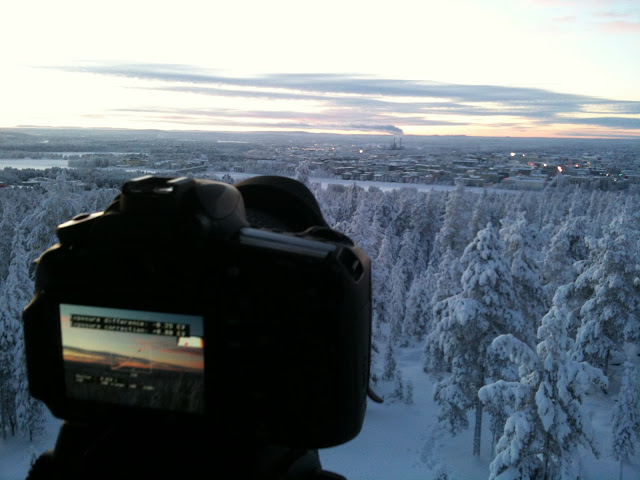 Here´s the result that I got from the view tower. This is still pretty raw with no processing so there´s little bit flickering and the colors are not as good as I´ll get them later on. Unluckily I ran out of card and I didn´t get the stars so well. I should have had been filming there at least for one more our.

Later on I called the students and asked if they still want to go for an adventure. Three brave ones, Dominik, Jakub and Tommaso had the guts to step into my caravan car "Skyvan" and travel into the wilderness 40km north from Rovaniemi. The mission was to find some auroras or shootingstars. 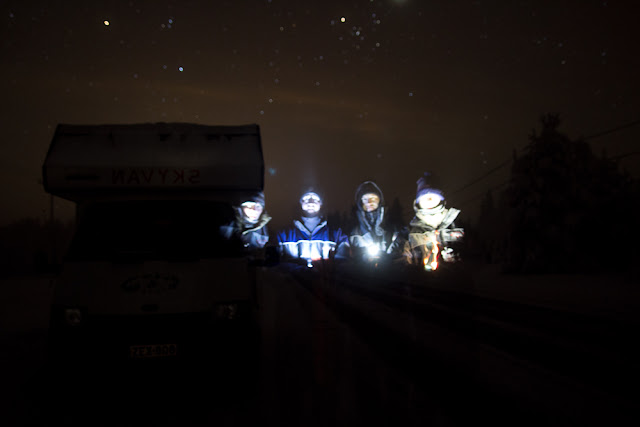 It was -20 celsius and pretty foggy everywhere. You couldn´t see the sky in Rovaniemi. First we drove to Olkkajärvi where you have good parking place near a lake with good view to sky. It was foggy but you could see the stars. We decided to find a better view a bit north from there. We drove to Misi and stopped in one of the bus stops in the middle of nowhere. It was hard to understand for the students why you need a bus stop in the middle of nowhere. Maybe they are for the reindeer :)

We built the shuttlepod pointing the northern sky and started the timelapse. This time we were not lucky to get any big auroras. Only a slight green shining on the horizon. The view was still amazing. We were there for a little bit more than 2 hours and the extra clothes that I brought seemed to be a good idea. Dominik, Jakub and Tommaso volunteered to join the aurora expeditions later on this winter. And we hear more about those trips later on. Here´s the star view timelapse that we got.