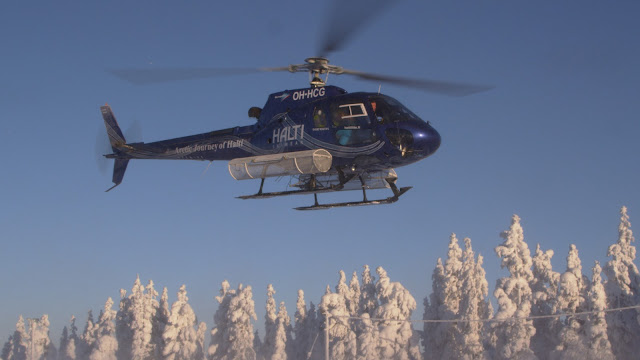 10.02.13 We were filming some promo material for company called Heliflite. It´s a company providing helicopter services in Lapland. Helihikes, fishing trips, charter flights and flights for film crew. I´ve been filming many times from Heliflite helicopter and this was a nice gig to take.

It was pretty cold morning when we started from Rovaniemi. Sky was blue and about -20 celsius. When we started to reach our destination Levi, the sky seemed more foggy and cloudy. In some areas you couldn´t see the sun at all. At Levi the temperature was -27 and the whole area was covered on thin fog layer at altitude of 50 meter.

Down in the road everything looked bad and foggy, but when we drove on the top of the hill next to restaurant Tuikku, whole new world opened. Sky was blue and the ground area was covered on white silk (fog) and only the hills pushed them selves through it. 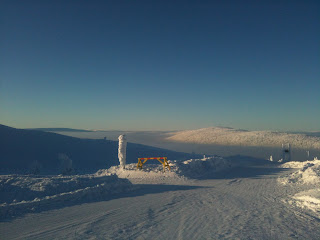 I met the pilot on a helicopter platform and we set up the camera. We started filming some takeoffs with customers. Helicopter taking off from snowy terrain just looks so good when filmed in slowmotion. Snow and snow blocks are flying as the giant helicopter is just lifted up in the air.


Then came our turn. I was ment to sit in the same place where I normaly do. I´m sitting outside the helicopter on a ski cage. It gives me really good ability to film handheld to all possible directions. Much better than filming from inside next to door. I think that my skydiving hobby is helping me with this one. It´s normal for me to be hanging outside the plane or helicopter.

We went airborne. After 2 minutes I had to ask my assistant Dominik to loan his goggles. The wind that I was having to my face was so cold that I couldn´t do anything without them. I thought that I can´t film with goggles because of the tint and fog and that´s why I didn´t put them on in the first place. Luckily Dominik had them and saved me by giving his goggles on my face.


The weather was beautiful, but very difficult to film. When we went under the fog, the air was somehow very moisturized and cold. -27 but still foggy. It really felt extreme. Dominik and I had to work really hard to keep the camera filter clean from fog. I really have to thank Dominik for assisting me because without him it would have been almost impossible. 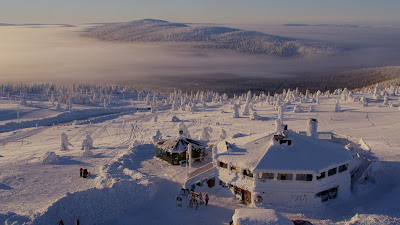 Anyhow above the fog layer everything looked really nice. As soon as we got the fog layer of the filter, we started filming some moneyshot pictures of Levi and cafeteria Tuikku. We flew quite low to film the snowy trees with the landscape and the hotel Panorama which is on the halfway of the slopes of Levi. 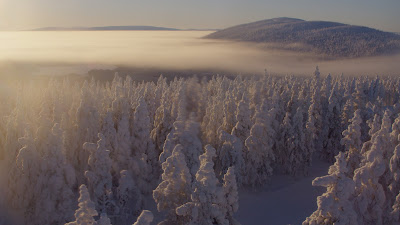 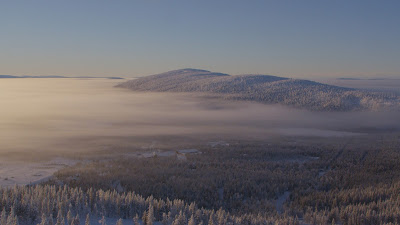 After we went second time under the fog layer to film Levi village, I started to feel extreme cold on my face (which was fully covered) and fingers. We flew once over the village and landed shortly after that. It was a bit diffirent aerial filming this time, but really worth it. Some of the clips are maybe best I´ve filmed so far.


I bet that the promo for Heliflite will be posted here as it is edited.