26.-28.01.2012 Was the 47th Arctic Lapland Rally in Rovaniemi. Our crew was hired to film a micro documentary videoblog about the rally and the things what happens behind the scenes. We had 3 lightweight&mobile camera groups, incar gopros and our team with Red Epic filming the material. Our goal was to film stylish slomo shots from the drifts & jumps and the mobile teams were more capable to shoot more material at distant locations and pitstop areas.The weather was maybe most challenging that you could imagine for Red Epic. As we know Epic is like a computer that has lens on it. Temperature was under -20 almost the whole week and the air was full of flying ice particles from the track. The event was in Rovaniemi where we still have open river making the air humid despite the arctic temperature. Every time when car drifted near the camera the spiketires lifted up a storm of ice.Red wasn´t the only one suffering the conditions. Here´s one example of our production cars that had all possible warning lights on 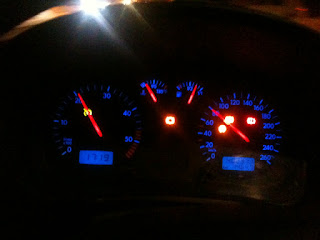 Red had no problems what so ever. The touchscreen monitor was the thing we were worried about before we got the camera, but it didn´t had any problems. The drawing of the monitor and the touchability functioned well. Only problem was that you couldn´t use the touchscreen with a touchscreen pen and you had to do it with your bare fingers. In -25 operating your camera settings with bare fingers isn´t nice. We´re still waiting the RedMote to arrive that allows us to controll the camera without touchscreen. 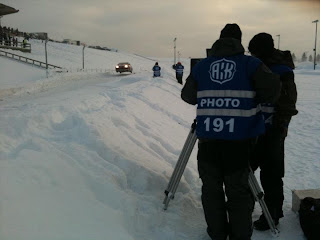 Last day we were filming slomo jumps in the rally arena and got some really nice ones captured 2k 300fps and 4k 100fps. You can check the results from our daily videos, or the final compilation that will be published soon.

Posted by Vesa Rönty at 1:09 PM No comments:

I am Laura, the girl of the crew. I am spanish and I am working in Lapland Memories since 10th of January. I will like to show you my point of view about the last filming days.
Last weekend we were in Pyhätunturi, up in finnish Lapland, filming some snowmobiling. with Red Epic. It was the first time that I’ve lived this kind of filming experience. You see always the final product but “behind the scenes” sometimes is really hard, at least for me this time. In such a wild scenary everybody has to be really careful with the material and you have to be ready to stay in a windy and frozen place for hours.

First day was hard for me. Friday 13 was not so bad in temperatures. I think the lowest we had was something like -10 degrees but when you are from Spain is really shocking at first. As everyday that weekend, we had to take all the stuff to the top of the mountain with the snowmobiles, so the driver has to be really careful and sometimes is quite possible to get stuck in the snow. My idea and Pera’s was to do some kind of making of… with Canon 60D, but the first time I took my gloves off to handle the camera my hands got frozen and I could not do it.  I felt really disappointed and I though I should gave up  but while the day was passing I started to feel better and I learnt some things to do for getting warm. For example, you have to keep on moving all the time even if it is hard in the snow... So in the last hours of the day I could take some pictures with the camera and I could even handle and help building the dolly and the Revolution Head. Anyway it was really hard because it started to snow and when your skin touch metal it hurts so much… But now I think I got used to that. No problem.
About the filming that day: after the whole light hours filming snowmobiling, we tried to mix it with some fire. The experiment was great and now we have great images about that in slowmotion. Red Epic + ShuttlePod + Revolution Head is a really good mix. I’ve never seen this camera before and is really easy to handle and the quality is the best. I am really happy that I can be part of the team and be part of the filming experience with Red Epic.


About days 2 and 3, we were filming in the mountains again some snowmobiling and landscapes of Lapland from the top of the mountains. The weather was a bit worse and I think we felt sometimes more than -20, above all the last day when everything got frozen all the time. Anyway, the sky was beautiful these two days. The bad thing was that every stuff we had: clothes, backpacks, cameras, rails… Were full of ice all the time. By the way, these days, the places we choose for the filming were not so difficult to reach. About the weather, second day was ok and we finished quite soon, but last day was a very foggy day and we had to wait to get some good views. We used again Red Epic and the dolly + Revolution Head, and  here is what proofs that everything was completely frozen this day. Just look at my hair…
While we were filming the landscapes I felt a bit  scared because we were in a kind of dangerous place… But the views were completely impressive.
I think this weekend was a great experience for me in every possible way: I got used to the weather, I’ve seen the most beautiful landscapes ever (Lapland is just awesome), I’ve learnt a lot of things about filming and how our stuff works, I’ve learnt a lot of new things about Finland; and I knew a bit better my team.  I had the possibility of staying at home but, even with the bad things, I am happy that I took this chance. I hope that alter this I can be more useful for Lapland Memories, I just needed some time to get used to the new city, the new company, the new people and the new whole life. Is not easy to be spanish in Lapland but I will find the way!

Laura
Posted by laulapland at 11:42 PM No comments:

It seems we´ve been really good last year because we got so many good presents this Christmas. First we had the Red Epic, but we also got a package from Kessler Cranes. We didn´t have time to open it untill now.
Package included Shuttlepod (small dolly), rails, RevolutionHead (tilt&pan head), pocketdolly, 3 different speed motors and two Orcle remote controllers.

Maybe the best example "what you can do with Kessler" is Tom Lowe, Timescapes:

The Arctic Light from TSO Photography on Vimeo.

We just opened the package so we don´t have our mindblowing nature timelapse on air yet. We did couple tests though.

First one was just a simple dolly movement with camera tilt while cleaning the office:

And as the second test we made the shuttlepod to climb our stairs to second floor while we cleaned the studio.

I can´t wait to get out in the wilderness to make some nice timelapse photography. It has promised better weather day after tomorrow, maybe then..